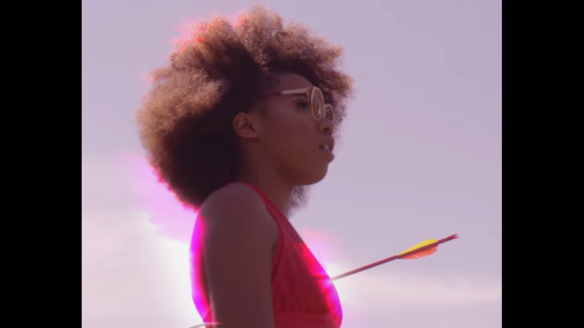 trigger warning this piece contains writing concerning sexual assault and/or violence which may be triggering to survivors.

My last few months have been filled with cartoons and Harry Potter.

Last week was Pixar movies + Goblet of Fire! Pixar’s celebrated 2008 film WALL-E came up in a conversation with some friends at a show the other night – Eric described its first half hour to Alex as an “art film,” and I agreed that it’s the kind of animated film you recommend to your sophisticated 30 year old friend (Alex is our sophisticated 30 year old friend). When I actually re-watched it, though,  what I saw made me feel disturbed, alarmed, and disappointed.

Mick Jenkins’ new video “Your Love,” off his recent Wave[s] EP, is a lot like the beginning of Wall-E. A dude sees a woman and is instantly attracted to her. She is uninterested. He follows her. He initiates physical contact, she violently resists. He then finds a cute, funny way to violate her while she is unable to fight back. As a result, she falls in love!

The violation in Wall-E occurs when, Eve, the robotic love interest becomes incapacitated. Her system shuts down and our titular character, the guy who lives alone collecting garbage, dresses her up in the aforementioned trash and wheels her body around town. In a sentimental montage, Wall-E makes her do the things he wanted from her like appear pretty and nonthreatening, desperately need his protection on scary nights, and, yes, hold hands.

Jenkins shows off considerable comedic acting chops in the “Your Love” video, a nice change of pace for an artist whose visuals are often purposefully serious. Even so, there’s an off-kilter element to “Your Love,” something strangely empty in its actors’ mannerisms. It culminates when Mick’s character rolls up on the other lead, played by musician Jean Deaux, and shoots her in the chest with an arrow. As blood drips from her lips, the viewer can’t tell from her stare if Jean is falling in love or dying.

What appears in Wall-E and “Your Love” is what happens to women in a lot of media. They’re set up as objects of desire with a false sense of independence. I watched Ratatouille following Wall-E, and the main (human) character, Linguini, is introduced to his eventual love interest Colette by being thrown face-first into her breasts. Her very first act is to be violated. Colette is characterized as irrationally combative, as if she’s paranoid that some dude (or collection of dudes making a plan/writing a movie) is out there ready at any second to force her to do something she doesn’t want to do. The more she resists the more coveted she becomes, like Eve, like Deaux. When Colette, after showing no prior attraction, is kissed (without consent) by Linguini she has pepper spray in her hand.  And then she falls in love!

This pattern upsets me because I see it in myself. It reminds me of my own behavior, a past that includes physical violation and unhealthy objectification of women in my life. I used to think that I was being romantic when I was being obsessed or that it was sexy to force contact with someone I desired and then see what happened. In the surprise ending of “Your Love,” the car Mick Jenkins’ was riding in has crashed into a pole. All of his friends riding with are dead, their bodies littered everywhere. The implication is that his arrow-induced interlude with Jean was just a fantasy. Mick staggers out into the street and looks off into the night as if he’s deep in thought; he might be contemplating gender politics.