This piece originally appeared in Side By Side Magazine,  June 2015.

So how did you start with music? How did that come into your life?

Dina: I would have to say it started in high school, it’s kind of like a love story/musical love story.

Egon: I had a secret friend crush on the kid with the Dead Kennedys t-shirt (that always got in trouble). And at that point I was already into like Alice in Chains, Nirvana, and Green Day.

Eric: I started playing bass in high school, oddly because that was the thing  to do at my high school. Like, everyone played bass. And, I don’t know, I’d wanted to have something to do, I guess. Bass was fun, and yeah.

Erin: When I was in high school I had this chorus teacher. She gave me voice lessons and I learned how to sing jazz. And like shape note music and old hymnals and gospel. And some Byzantine operatic stuff that I was really into. I never thought I was very good. The first time I ever sung onstage was this Distillers cover at the Heartland Cafe open mic. And it was so bad that when it was finally over I said “Sometimes you have to fail to remind yourself what you’re good at, which is poetry.”

Eric: I’d mostly play with my friend Max, he had like fifty instruments or something. He mainly played mandolin but he had all these things that I hadn’t really heard of. He had this one thing that was called a mandocello. It’s called that cuz it has four strings and you play it like a mandolin but it’s in the same range as a cello. It kinda looks like a guitar.

Dina: It wasn’t like this burning flame for most of my life, you know, it was totally random for me.

Dina: Yeah! With years it became something much stronger. For example, this week I had four or five shows. In the realm of playing music I honestly do feel like it’s burning and taking up all my time in a good way.

Egon:  I’ve been playing guitar for over fifteen years now so it’s a huge part of my life.  And a little while ago, maybe two years ago, I told myself that I would practice everyday. Even if it was only for fifteen minutes. And I’m pretty good at doing that.

How often do you write poetry?

Egon: Poetry is the one thing even greater than music that I just do compulsively and it doesn’t matter how well or bad I’m doing or how rich or poor I am or whatever it is a compulsion that means the world to me.

And I’d like to see and do more of that, and to see if we can somehow build a platform for that. [Erin & I] are talking about trying to do a book when we go on tour, just to have something else that people can look at and engage with.

Erin: I try for daily. But – all we can do is try. Also sometimes it’s terrible. I realized, in talking to my mother, at bars I write poems on coasters, at work I write poems on receipt paper. When I’m trapped in a situation I find these listening objects that allow me to express a little something upon them.

Writing has always made me feel real. Like writing in a journal and the tangible act of putting your thoughts into this finite, real space of a page and ink and language, it’s like the only thing that makes me feel like I actually exist. 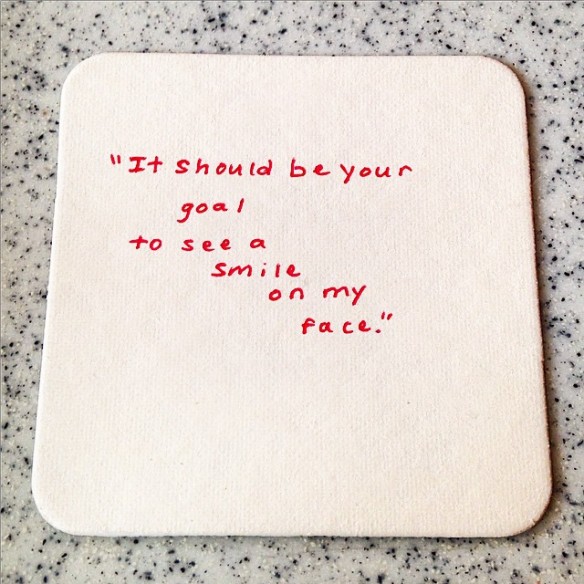 Did you see yourself in high school as being this person you are at this point at this time?

Dina: I don’t think so, no, at the time it was very intimidating to me. I never really thought that I could get to this point. I was a closet musician for the first couple years of playing the drums. ‘Hey, I’m gonna play my drums in the garage when no one’s listening and uh if anyone in my house hears me I am gonna feel very embarrassed.’  I never really thought that I’d have the confidence to be where I’m at now. I feel very happy about where I’m at, playing with all kinds of people. It took me a few years to get to that point.

I think that I just didn’t have anyone to tell me that I could make it. And I just had to take baby steps.

So you wrote- is that song actually called “Dina’s Song?”

Dina: The one we’ve been playing live?

Dina: Yeah, we decided that it’s called “Dina’s Latin Number.” This particular song we were jamming one night and it was a struggle, that practice. We were trying to write new songs – some of the songs we were trying to write are on our new album. Toward the end of practice we were thinking we should call it quits and I was just being silly like “You guys let’s just play like a Latin-based [thing]” and I started playing *mimics drum beat* going along with it, you know.

And next thing you know, Erin’s getting all warmed up and like “Ok, let’s do this,” and Eric starts to play and Egon starts to shred.

Egon: I blew up my hand on that song!  The guy from Longface and Regular Fucked Up People, Anthony, I bled all over his guitar! My hand just like blew up during that song and it’s interesting cuz it was there and very palpably there. You knew what it sounded like,  but it probably took us another month to figure it out. And it was something that Erin and Dina always wanted to play live and Eric and I were like  “Nononono, uhhh we don’t know what in the hell we’re doing!”

Egon: But it was there, you know. And it kind of took Eric and I kicking and screaming, not that we didn’t wanna do it, we just wanted it to be perfect. I think a lot of our songs get written that way. Where you’re like “Well, SOMEONE has entered the room here! Who are you?”

Eric:  I think the first time we jammed together he just belted out “#summerhit”

Egon: Emanuel, it was one of the most beautiful moments of my life. Monica [Wizgird, multi-instrumentalist and former member] was like “My friend Eric is coming over we’re gonna have band practice,” and our relationship was very young at this point. I was like “Oh, that’s really cool let me grab my things I don’t wanna like intrude,” trying to be considerate. And she was like “It’s really more of a casual thing if you wanna sit in I’m sure no one would mind, it’d be really fun, I know you play guitar.”

I was noodling around on her keyboard and her synthesizer and at certain point she said “Here do you wanna play the guitar? And I’ll play the keyboard?” And that’s when “#summerhit” was written.

And there was this really funny moment – cuz we recorded all of our early practices – where we make the skeleton for “#summerhit” and it finishes and you hear Erin go “Monica, I hope it’s okay but you know he’s in the band now, right?” 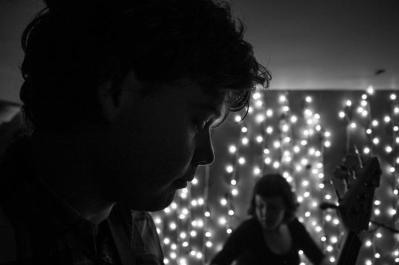 So what was CONDO and how was it different from Daymaker?

Eric: CONDO was totally different from Daymaker. It never became a serious thing it was always just like me, Justin [Booz], Erin, and Viviana [Gentry Fernandez-Pellon]  jamming.

Justin was also super into noise and stuff and we would just kind of meet up once a week or at random times and just jam.  That’s pretty much how Daymaker started writing songs and still writes songs.

What’s weird is how CONDO and Daymaker both were weird, droney, experimental projects at first. I was playing guitar through my laptop and we would just improvise stuff and Monica and Erin would play synthesizer also through, like, Ableton.

And we would write some songs but it was a super super super loose thing basically until Egon came along and started playing guitar and I switched to bass, you know, which was my first instrument.  And then songs just started coming together.

What about Ruby [Dunphy, former drummer]?

Eric: Ruby was another Erin find. I didn’t know Ruby until she showed up to practice too. I hadn’t heard of Haki or any of that. Erin just has a knack for finding cool people.

*A note on the author’s process: This Feature was compiled from four separate interviews with the members of Daymaker. over the course of one week!