+ (pronounced “plus sign,”) a DIY rapper and city planner. The educator, artist, and political scientist born & raised on the Southside. It has released twenty two full-length albums of music, along with at least five mixtapes andover a dozen EPs. The work spans from lo-fi pop to “summertime car bangers” (~Chicago Reader) and acapella folk tales.

The 29 year-old joined the literacy nonprofit Young Chicago Authors as a teen, starting out in their annual Louder Than A Bomb youth poetry slam festival. Since LTAB + maintains a frequent live presence around Chicago as well as a prolific writing career- notably as an arts journalist. Its most recent excursion in poetry is what is eternity? (2015), co-authored with fellow YCA alum Adam Gottlieb. It recently co-created & facilitated YCA’s Queeriosity program, a salon for queer and questioning youth, with h. melt, Jamila Woods, and Fatimah Asghar. Plus has also provided community organizing work as a farmer & Chair of the Board at the community garden nonprofit The Cooperation Operation and helped start the transformative justice-based project F12 Network. 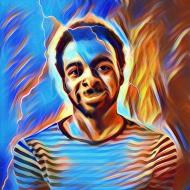